She wore pearls and drove a Cadillac; a great big gold Cadillac. 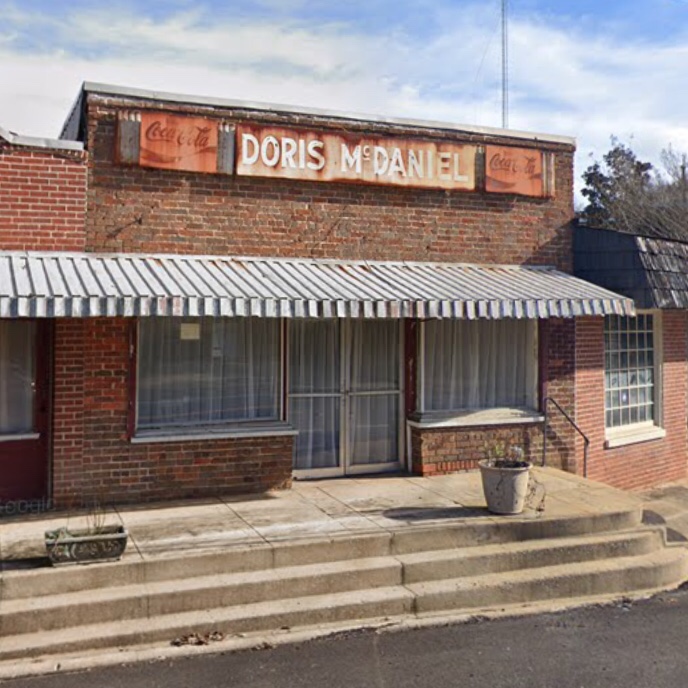 Mrs. Doris McDaniel spoke with an old Southern accent. An accent not easily imitated even by Southerners; Hollywood always gets it wrong. She dropped her R’s which made her sound like 19th century southern aristocracy. She also wore pearls and drove a Cadillac; a great big gold Cadillac. This certainly encouraged my childhood idea that Mrs. McDaniel had descended from royal stock. I thought she was the richest woman in Shelby County. She may also have been the sweetest.

Already in her 70’s when I was a child, she still owned and ran an old store right in the middle of Vincent. Prime real estate which set the halfway mark for the Christmas Parades. I don’t know how long she had the store, it was just always there. Kind of like her: a fixture in the town. As long I could remember, she kept odd hours at the store. People knew the store was open if her Cadillac was parked out front. The store was the only place in Vincent where you could buy a set of snow skis. It was like a permanent indoor yard sale. I think she kept the store open just to get out of the house, and to see people. People always made her smile. I think people came in to see her too. They certainly weren’t looking for snow skis.

Mrs. McDaniel was Jared and Creed’s grandmother. They called her Granny Mac. She would watch them sometimes during the summer. Whenever we got a little rowdy, she would say things like, “Oh my! Boys, that’s not nice.” She had a way of sort gasping the “Oh my”, and stretching “Boys” out to have an extra syllable. Even so, I never saw her lose her composure: She was a lady.

We would hang out at her store sometimes; stopping in to say hello and to feel the air conditioning for a moment. It was usually a checkpoint before we went gallivanting down the railroad tracks. She was always happy to see us, or anyone else that came in. She treated everyone that came into her store the same way.

The last time I saw her I was an adult. “My, my, my! Look how you’ve grown.” She said energetically. I had never noticed how petite she was until I was grown.

I introduced my wife. “How are are you hon?” She reached in for a hug.

“She is beautiful Zane.” She had a way of throwing an extra syllable in my name too.

If you ever drive through the town of Vincent, Alabama, you’ll probably take the old parade route: Highway 231. You’ll know you’re in town once the speed limit drops to 35 miles per hour, but you really aren’t downtown until you drive under the railroad overpass. The Christmas Tree will be on your left and Florey St with all the municipal offices on your right. There is a building on the right with a big sign that reads Doris McDaniel. Just know that one of the sweetest ladies that ever lived used to run that old store.

If that sign isn’t still there, it ought to be.