Zach and I used to beg Dad to let us help “Clean the Guns”, a ritual where we all would crowd around Dad’s closet and he would carefully lubricate and clean each firearm with a tin can 3-In-One oil. “Don’t touch the metal. You’ll get fingerprints all over it.” That’s rule number one of gun safety. I still make a conscious effort to not touch the metal on a gun any time I’m handed one to inspect.

Before he started wiping the firearm down, he would set the stock on his knee with the barrel pointed towards the ceiling, and we would all look at it in wonder. Each gun had a story. “I traded a bird dog in 1970 for this 12 gauge Remington 1100. I’ve killed a few deer and ain’t no telling how many birds with this thing.”

He was also prone to shooting dogs. We lived in an old house that was built on blocks. Before Dad installed underpinning, or had me and Zach install, stray dogs used to get under the house and break the water lines. One time Dad got caught up in the moment and shot under the house. Another time he chased a dog out of the yard for waking him up by barking. Dad had been working late nights and when he came to himself, he was standing out in the front yard in his underwear and work boots, holding shotgun yelling at a dog, at ten o’clock on a Sunday morning. But he didn’t usually tell those stories while we were cleaning the guns.

He would then pass the 1100 to Zach, who would put to his shoulder and aim across the room as if he was getting a lead on a dove. POW, he would say under his breath, letting it reverberate a little bit as if he had shot a bird on a cool still morning in the Alabama wilderness.

“Watch where you’re aiming that thing!” Dad would say as he reached to take the shotgun away from an eight year old boy who had just nearly hit him in the head with a shotgun. “You have act like every gun is loaded.” That was rule number two of gun safety.

Dad would then hand the shotgun to me, who had been waiting impatiently to hold a shotgun that was taller than my brother. When you’re that small, you are doing good just to be able to hold the gun without dropping it, let alone stressing about proper form and aiming. My Uncle Johnny remedied this by sawing about four inches of stock off of a single shot Harrington & Richardson .410. I still remember him bringing it over to our house.

The most mystically firearm in our modest arsenal was Dad’s lever action Marlin .30-30. A genuine cowboy rifle, replete with a gold trigger. Zach & I would work the action from hip, pretending we were Tell Sackett. Dad had shot a deer with this rifle that didn’t quite die. As he was walking toward it, the deer jumped up and began to run by him, Dad leaped off a stump like Tarzan and cut the deer’s throat with a pocket knife. This story added to the mystique of the cowboy rifle.

It didn’t take long to clean oil all the guns, but the ritual of “Cleaning the Guns” also involved looking at all of the pocket knives. Dad bought us a bunch of cheap, made in Pakistan knives because he knew that we would end up losing them anyway. And he was right. I lost a Frost Cutlery Royal Flush at Mrs. Yvonne Clinkscale’s house as I was climbing a tree while my brother endured his piano lesson. I probably climbed thirty feet up into that tree.

I had a Barlow pocket knife that I threw at a tree across the road after church one day. I remember thinking that no one would see me if I went around to the side of the church. Somehow Dad saw me, maybe through one of the six windows. Anyway, he must have witnessed the knife fall about fifteen yards short of the desired target and land in the middle of the road, square on the tip, bending it at a ninety degree angle. Dad sent for me to come see him on the back pew of the church, and he pocketed my Barlow.

The only two knives that I have left from my childhood are the only two that matter to me anyway. Dad bought me a yellow handled Case Slimline Trapper when I was two years old.

I carried that knife for about fifteen years, before I decided to get a new one.

Uncle Jimmy gave me a red stag handled Case Trapper the year after my grandfather died. He would have been 55 years old. This knife is 55 of 110. 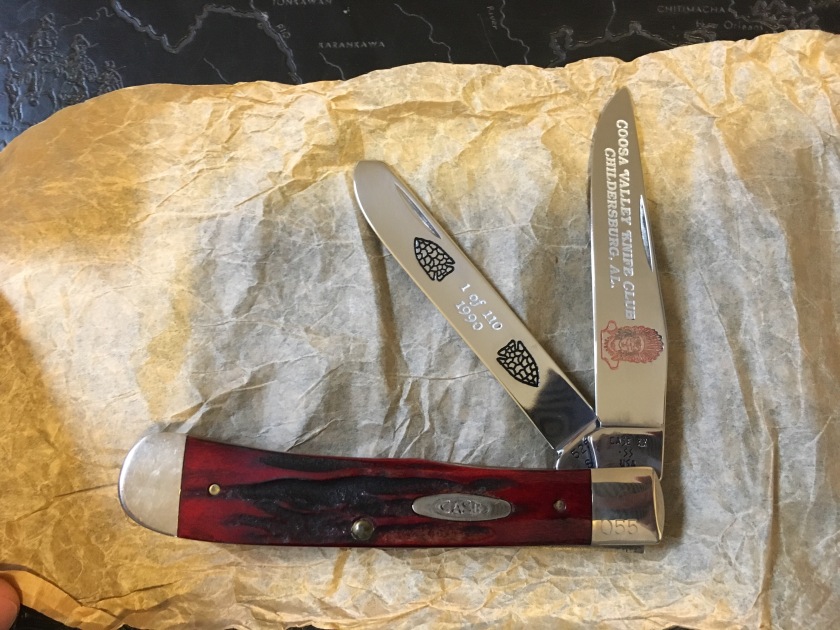 Perhaps my first introduction to gun safety was when Dad took me out by the chicken pen and sat up a milk jug full of water as a target. He raised his shotgun, drew a bead on the milk jug and BOOM! The milk jug exploded. I was just barely out of diapers looking with amazement, first at Dad and then to where the milk jug had been. Ever the teacher, Dad said, “This is not a toy.” Wide eyed and unblinking I nodded back at him. This is the principle rule of gun safety.

My cousin Kent could have benefited from a demonstration like that.  When Kent was about seven, his grandfather took him hunting. Kent sat down beside him and they waited for a deer to walk by. Which is the part of hunting that seems the least exciting to me. Perhaps Kent felt the same way because his eyes began to wonder from the field over to his grandpa who was watching and waiting diligently. Then Kent’s eyes wondered to his grandpa’s shotgun, which he held directly in front of him, the barrel directly under the bill of his cap. Then Kent’s eyes wondered to the trigger, which was closer to him as he sat the on the ground. Eventually curiosity got the better of him and he slowly and quietly, sneakily probably is a better word, reached over and pulled the trigger. Booom! I can only imagine his grandpa’s surprise as the shotgun fired, blowing his hat off.

This brings us to the final rule of gun safety, in general, one gun is as dangerous as the next, but some people are far more dangerous than others.